Wrestling is the oldest sport in the world and renowned for its ability to develop self-confidence, tenacity, a tremendous work ethic, personal accountability and grit in the athletes bold enough to pursue it.  The Beat the Streets Detroit program encompasses free wrestling instruction, tutoring, STEM (Science Technology, Engineering and Math) exposure and mentorship from extremely dedicated and qualified coaches, tutors and mentors including national champions, state champions, veterans, doctors and lawyers all dedicated to Detroit area youths! We welcome kids from 8 to 18 at any of our sites (younger kids authorized with coach approval).  As the fastest growing girls sport in the country, both boys and girls are are welcome! Our program helps develop our participants’ skills and traits in the following key areas:

In 2004, the Beat the Streets Youth Wrestling program began in New York and partnered with New York Public Schools Athletic League. The program model has branched out and is now successful in many large cities across the country.  We introduced the program into the city of Detroit in 2009, and implemented the BTS concept of teaching leadership, integrity, health, team work, and respect through both recreational and competitive wrestling.

Mike Rodriguez is a nationally recognized wrestling coach. As a member of the University of Michigan Wrestling Team he won three Big Ten Championships and was a two-time finalist finishing second twice in the NCAA Wresting Championships. He was a legendary coach for 51 years at Detroit Catholic Central High School where he won seven State Wrestling Championships and at River Rouge High School where he won one State Wrestling Championship. In 2007 Coach Rodriguez had the honor of being recognized as the coach with the most high school wrestling team wins (732) in the United States.  Coach Rodriguez started Beat the Streets Detroit in 2005 in one Detroit location with the goal of bringing this unique sport to kids in Detroit who do not have access to enough quality programming and after school activities.

Mark Churella is a three-time NCAA national champion from 1977 to 1979. He served as the head wrestling coach at UNLV from 1979 to 1984. He has been inducted into the University of Michigan Athletic Hall of Honor and the National Wrestling Hall of Fame.  Churella joined BTSD in 2010 to further the mission and under his leadership Beat the Streets Detroit has spread to 5 locations throughout the Detroit area and serves nearly 200 kids each year. 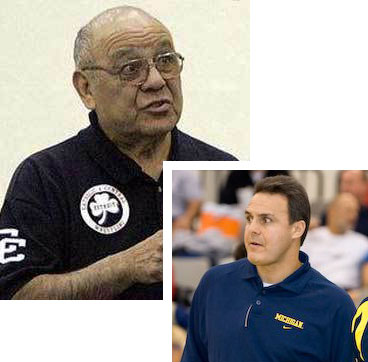