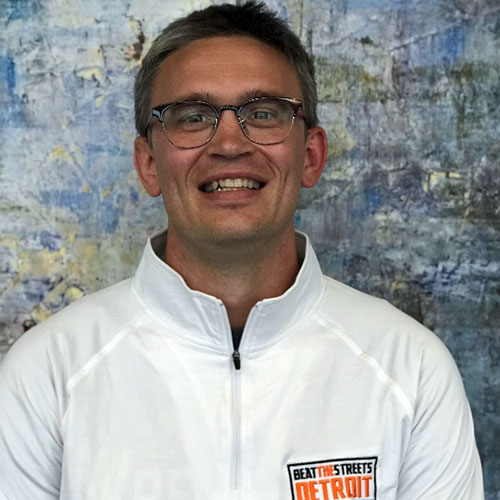 Coach Cunningham is a math teacher at Huron High School in Ann Arbor and a member of the Coaching Team at Mumford High School in Detroit. He is a graduate of Tecumseh High School in Tecumseh, MI and earned a bachelor’s degree in English and Psychology from the University of Toronto where he wrestled and was co-captain during the 2003-2004 season. He holds a master’s degree in teaching from Oakland University.

Before coaching wrestling, or even teaching, Coach Cunningham was a journalist and worked at the Ann Arbor News as a sportswriter/editor from 2009-2014. Around that time, he made a bold decision to change courses completely and pursue a teaching career through the AmeriCorps program “Teach for America.” In large part, that decision was born from a motivation to truly make a positive difference in young people’s lives through coaching wrestling.

Coach Cunningham started the Mumford High School wrestling program in 2014 and started working with Beat the Streets in 2016 with the goal of expanding the high school program to include interested younger kids. The result is that the Beat the Streets Detroit / Mumford program has become a beacon of hope and is a true community-based program. The program was even featured recently in an ESPN article. Mumford High School is currently the only school in the Detroit Public School Community District that offers wrestling.

Coach Cunningham lives with his wife Katie and two daughters, Joy and June, in Ann Arbor. 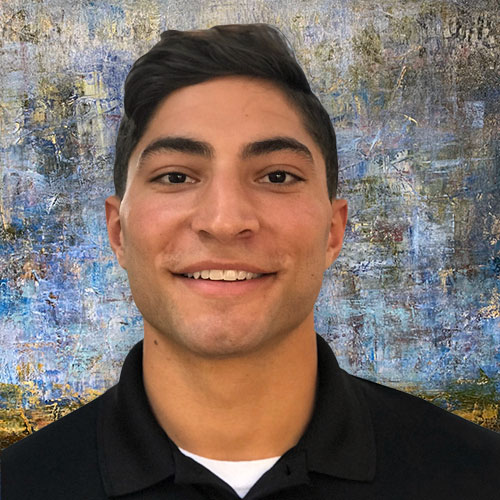 Coach Chris Saadatjoo attended Seaholm High School with his twin brother, Michael. Coach Saadatjoo was a 4-time varsity letter winner, 2-year team Captain and 2-time League Champion. At the time of his graduation, he had the 3rd most wrestling wins in Seaholm’ history. Upon graduation, Coach Saadatoo joined the United State Marine Corps as a Combat Engineer. He is currently a reservist and assigned to Detachment B of Marine Wing Support Group 471 at Selfridge Air National Guard Base in Mt. Clemens Michigan. When not performing his Marine Corps duties, Coach Saadatjoo is a licensed firefighter and EMT. He is also currently enrolled in a paramedic program.

As if that weren’t enough, Coach Saadatjoo is very involved with Beat the Streets Detroit and currently works with BTSD as a coach at our Mumford site. His main goal with coaching is to help develop discipline and accountability in the athletes’ lives. “I would like them to come to me one day and say that because of what we taught them while wrestling, they were able to get into their favorite college, got their dream job, or themselves made a positive difference in someone’s life.”

Coach Saadatjoo says that the way he acts and carries himself stems from what he learned while wrestling. “I took the habits and skills I learned through wrestling to the Marine Corps and it was evident how much more prepared mentally and physically I was over my peers.” By the end of recruit training, Saadatjoo not only earned the title “Marine,” but was the squad leader of his platoon and was also meritoriously promoted. Saadatjoo quips that Dan Gable (who is one of the worlds’ best wrestlers) once said, “once you’ve wrestled, everything else in life is easy.” “While I won’t go so far as to say boot camp was ‘easy,’ my wrestling experience sure made it a heck of a lot less hard!”

Coach Saadatjoo believes that by focusing on the small things, the big things will take care of themselves and he drills this philosophy into his young wrestlers. “To me, winning or losing is something I don’t particularly focus on.” He says that “kids learn discipline from wrestling, and that is a gift that keeps on giving as wrestlers will reap the rewards of that trait indefinitely and in all aspects of their lives.” 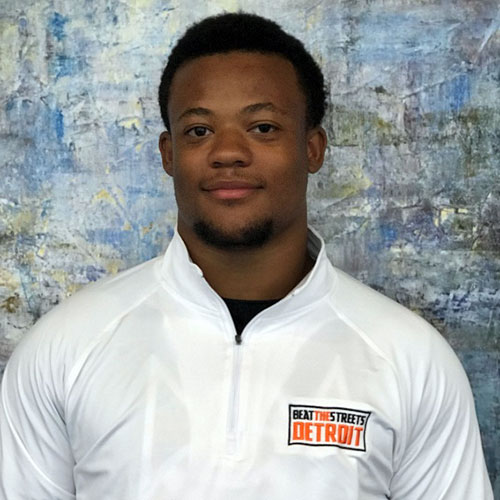 Coach Jake Brock grew up in Southfield and Detroit and started wrestling in 10th grade at Southfield High School. He was the captain of his team both his junior and senior years and earned recognition as the team’s “Most Valuable Player” in the 12th grade. That year he also wrestled in the state championship and went 5-1 at the Virginia Beach National Duals post season. Coach Brock is an electrician working throughout the metro Detroit area and as a member of the IBEW local 58 Union. The most important thing he wants to accomplish with his work with kids in the Beat the Streets Detroit program is to inspire our wrestlers to have a post high school plan. Regardless of whether they pursue college or a skilled trade such as plumbing, carpentry, HVAC, millwright, electrical and the like, Coach Jake wants them to have a goal (or two) and be equipped with the skills necessary to accomplish their goals. Says Coach Brock, “I want our kids to use the name of our program – ‘BEAT THE STREETS” – as a call to action. I literally want them to ‘beat’ the lure of the streets and most definitely don’t want them to fall victim to a negative inner-city lifestyle.” Coach Brock believes that if our wrestlers use the tangible and peripheral skills they gain while wrestling, not only will they be successful, but they will also be motivated to give back to those younger kids who will follow. Along with every member of the Beat the Streets team, Jake believes in the unique power of wrestling to change lives for the better. Says Brock, “I want to see wrestling at EVERY high school in Detroit Public Schools (not just Mumford). Detroit needs their own conference because there is just an overwhelming amount of talented and athletic kids who currently don’t have the opportunity to participate outside of Beat the Streets Detroit.

Coach Mike Conflitti was a student/athlete at the University of Findlay, where he was an All-American wrestler and team captain. In 1999 Mike was the assistant coach of the National Runner up Findlay Wrestling team and graduated with a degree in Sports Science. He is also a NSCA Certified Strength and Conditioning Specialist (C.S.C.S.). Mike’s passion has been and continues to be wrestling. He is one of the top wrestling coaches and instructors in our area and has been involved in youth and high school wrestling for over 25 years. After coaching at Muskegon Community College which was the 2000 #1 ranked junior college in the nation, he moved back home to take charge of the Hazel Park HS program. From 2001-2010 Mike was the head coach of Hazel Park HS which reached the Division 2 Team State Championships three times. In 2013 Mike took 7 local wrestlers and started a summer training system and a national team called the Roughneck Wrestling Club. Mike is married and has one child, Luca.